We flew from Mendoza to Buenos Aires with LATAM Airlines and got a taxi to Milhouse hostel. There are two Milhouse Hostels, Avenue and Hipo. We stayed in Hipo. Milhouse hostels are quite central and it is a party hostel so has party nights followed by a night club pretty much every night.

There is so much to do in BA. I don’t think we did even half of it but we had a great 5 days seeing some sights and enjoying the food and wine.

There were a lot of free city walking tours, but BA is so big that we couldn’t decide between the tours. You can do city tours and tours of areas like La Boca. We just explored ourselves instead.

Not far from our hostel was Plaza de la República which has the giant BA trees and the Obelisco. We stopped here for some pics on our way to Recoleta. 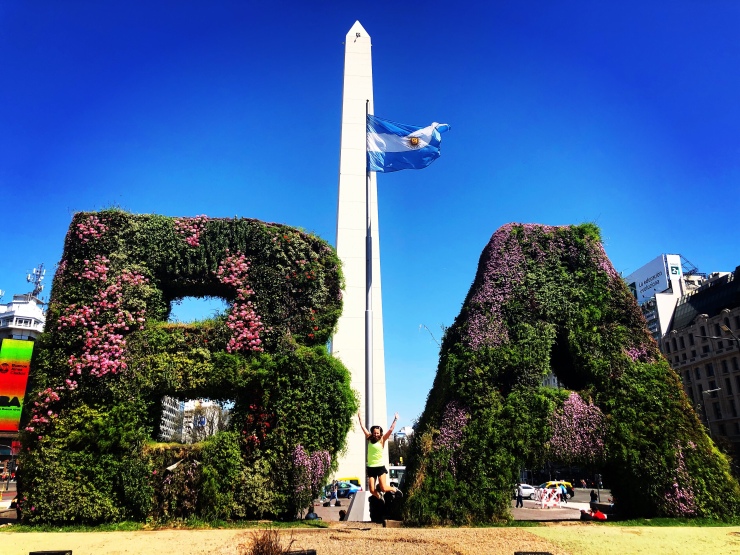 We walked to the Recoleta area and went to the cemetery there. It was actually really cool. The tombs were so extra! It is definitely worth checking out. You can do tours of it too but unless you want to know about who is buried there you can just explore.

Nearby is the Floralis Generical in the United Nations Park. It is a really nice park to chill out with lots of seats and people having picnics and walking their dogs. It has a massive flower in the middle which is cool to see. We chilled here for a bit before our walk home.

We went to a Boca Juniors Football match too. It was mad there. The fans were singing the whole game. The atmosphere was electric. It’s not recommended to go without a guide so we booked our guide and tickets with Milhouse Hostel. Landing Pad is another site you can use to get tickets, but they were more expensive that Milhouse.

We also went to a tango show at Tango Porteno. We had a tango lesson, a 3 course meal and a tango show. It was actually a lot better than I had thought it would be. It was nice to do something a bit different too. The food was good, the wine was flowing and it was good craic.

The food here was so good too. We went to London City for breakfast a bit because it was close by but there are a lot of cafes around the city. For dinner, you have to try Santos Manjares. It was so good that we ended up there a few times. Parilla Pena was recommended to us too. It was more of a small local restaurant. My boyfriend liked it more that me but it wasn’t bad.

We got the Ferry to Colonia del Sacramento in Uruguay with buquebus. It was so easy to check in and go through immigration and it only took slightly over an hour on the fast boat.